About the NEQ Club

The Northeast Chapter of the Audi Club of North America is a non-profit organization founded to promote driver education, safety, and camaraderie. Members enjoy the Audi experience through exposure to the Motorsport fraternity and other educational and social events.

The NEQ is one of several geographically organized chapters of the Audi Club of North America. ACNA members residing in Connecticut, New York, and Vermont are automatically NEQ members. However, all members of the ACNA are encouraged to participate at NEQ events.

Membership in ACNA entitles you to participate in all Audi Club events in North America, regardless of sponsoring chapter. Members also receive an automatic subscription to the club magazine, The Quattro Quarterly, as well as access to discounts on Audi parts, service, and cars.

NEQ members are encouraged to participate in NEQ leadership elections.

If you are interested in joining us, you can find further information here.

This letter was part of the very original written NEQ history that we have so far. Many thanks to Wendy Bellavance and Clare Earley for preserving and rediscovering this part of our past. 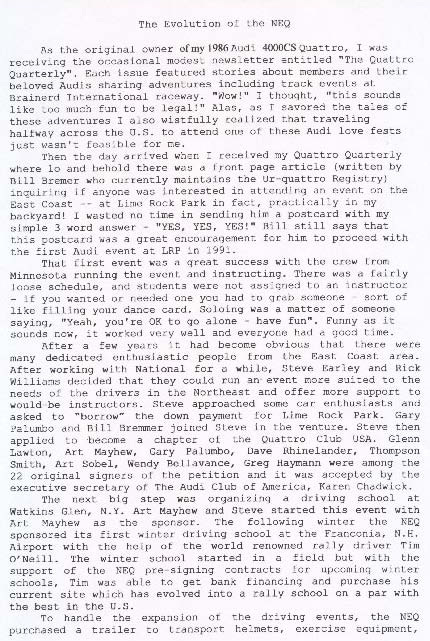 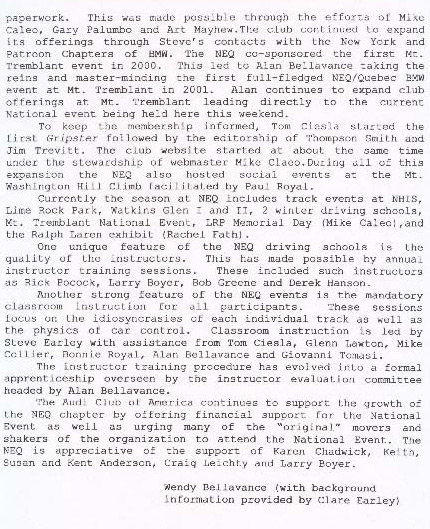 Should you be so inclined, you can read our bylaws and learn even more about our special club. Click here for the club bylaws

It takes many people to coordinate the effort of our club. In this directory you will find a list of our committees, their members and the members contact information.

AUDI AG is a German company which produces cars under the Audi brand. It is part of the Volkswagen Group. The name Audi is based on a Latin translation of the surname of the founder August Horch, itself the German word for “listen!" Audi is headquartered in Ingolstadt, Germany.

In 1932, Audi merged with Horch, DKW and Wanderer, to form Auto Union AG. The four rings of the Audi badge symbolize the brands Audi, DKW, Horch and Wanderer. Before World War II, Auto Union AG used the four interlinked rings, only on Auto Union racing cars in that period. Member companies used their own names and emblems.

Auto Union GmbH was established in Ingolstadt on September 3rd, 1949 following a series of changes as WWII came to an end.

Daimler-Benz AG acquired the majority of and finally the remaining shares in Auto Union GmbH on April 24th, 1958. From this date until the end of 1965, Auto Union was a fully owned subsidiary of the Stuttgart-based Daimler Group.

Volkswagenwerk AG acquired the majority of shares in Auto Union GmbH in December 1964, with Audi becoming a fully owned VW subsidiary from the end of 1966.

In March 1969, NSU Motorenwerke AG, which had just been taken over by VW, and the Ingolstadt-based Auto Union GmbH merged to form Audi NSU Auto Union AG.

In March 1980, a four-wheel-drive sports coupé was introduced at the Geneva Motor Show. The Audi Quattro was the first high-performance vehicle with four-wheel drive. This drive concept had previously only been used on trucks and off-road vehicles. The permanent four-wheel-drive system in the Audi Quattro enjoyed worldwide success in motor sport and gradually found its way into the entire Audi model range.

In January 1985, Audi NSU Auto Union AG was renamed AUDI AG. At the same time the company moved its head office from to Ingolstadt. From this time forward automobiles and the company had the same name.

This is a public domain image of the history of the Audi logos.

If you look carefully at the font and the rings of the Audi image in the collection below, you will see it differs from that in use today.

This is the latest version of the Audi logo. This was introduced in the fall of 2009 on the 100th anniversary of Audi.

May 18-20, 2023
Join us at this High Performance Driving School at the historic Lime Rock Park, CT. This track takes a short time to learn, but a lifetime to master.

June 15-16, 2023
Join us at this High Performance Driving School at the majestic Palmer Motorsports Park, MA. 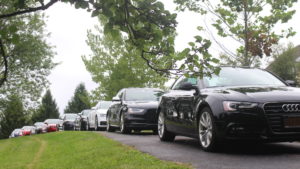 July 31 – August 1, 2023
Join us at this High Performance Driving School at Watkins Glen International. See what your car can do! 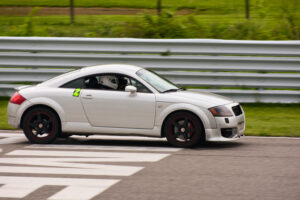 Sat, August 26, 2023
Join us at LRP for a day at amazing track! This is an advanced track-day for folks who have been signed off to solo