From the ACNA Driving School And Event Guidelines, Revised 2013:

The following guidelines are the minimum recommendation set by ACNA.  As previously noted, any track venue or ACNA Chapter may at their discretion set more stringent recommendations.  True convertibles are not allowed on the track at driving school events unless a four point roll cage is installed with appropriate five or six point harness.  The reason for this is roll-over protection.

The current minimum guideline regarding convertibles is:

• No convertibles will be allowed to participate at any ACNA driving school that takes place “at speed.”  This includes Audi TTs/R8s/S4s/S5s, Porsche Boxsters/Carreras, BMW 3/6/Z, etc…

• Convertibles with factory roll hoops and/or deployable roll over protection will be allowed only in the novice and instructors groups (revised July 2018).

The above excluded vehicles will be allowed to participate at the following venues were maximum speed is not to exceed 50 MPH if:

• Exercises at a driving school held in a confined area.

• Autocross events if the maximum speed is controlled/limited.

• Enforcement of the broomstick rule is required of all occupants and vehicles.

Minimum clearance (with helmet on) will be two inches below the straight edge which is placed from the top of the roll hoop to the top of the windshield frame.  For the above excluded vehicles to be allowed to participate in a high speed event, the minimum requirements are:

• A four point roll cage consisting of a main hoop behind the front seats with two rear-triangulated braces.

• A minimum of four, and preferably five, point safety harness.

• It is recommended that additional protection in the form of harnesses and arm restraints, for both driver and instructor be present.

• Removable hard tops are not considered structural roofs. The only exception is if they meet these minimum high speed event requirements.

Targa-­‐type tops with structurally integrated roll hoops are allowed, however enforcement of the broom-­‐stick rule is required. A targa top is a semi-­‐convertible car body style with a removable roof section and a full width roll bar behind the seats. The rear window can be fixed or removable, making it a convertible-­‐type vehicle. Targa tops are different from T-­‐tops, which have a solid, non-­‐removable bar running between the top of the windscreen and the rear roll-­‐bar. In both applications, roll over protection exists.

A removable hard-­‐top is a convertible that has a separate hard top attachment.  Merely placing a non-­‐structural hard top over the occupant does not guarantee roll over integrity.  This feature implementation varies among manufacturers.  ACNA policy states that "Removable hard tops are not considered structural."

A retractable hardtop, also known as coupé convertible or coupé cabriolet, is a type of convertible that forgoes a folding textile roof in favor of an automatically operated, multi-­‐part, self-­‐storing hardtop where the rigid roof sections are opaque, translucent or independently operable.  ACNA policy states that "Retracting hard tops are not considered structural."

Jan/Feb 2022
Every winter, NEQ hosts winter driving schools on frozen lakes in Upstate NY. Dates and signup are available in January each year.

May, 2022
Join us at this High Performance Driving School at the historic Lime Rock Park, CT. This track takes a short time to learn, but a lifetime to master.

June 2022
Join us at this High Performance Driving School at the historic Watkins Glen International raceway, in Central NY.

July 2022
Join us at this High Performance Driving School at the majestic Palmer Motorsports Park, MA.

August 2022
This track is so good, we come back twice every year. Join us at this High Performance Driving School at Watkins Glen International. See what your car can do! 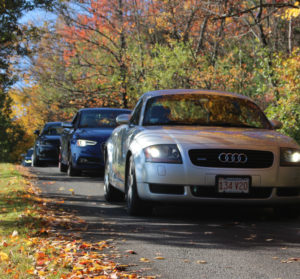